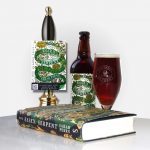 The Essex Serpent, by Sarah Perry is a gothic Victorian novel inspired by our home village, Henham’s very own dragon! The novel has already won critical acclaim, being pronounced Waterstones’ Book of the Year 2016 and in contention for more. Thus, to celebrate the launch of the paperpack on 20th April, we have teamed up with the publishers, Serpent’s Tail to produce a celebratory ale, featuring the beautiful, William Morris inspired artwork. In keeping with the original Essex folklore, we are encouraging everyone to report “Serpent Sightings”. Both the pumpclip and the bottles feature a QR code, which lead to a dedicated website where one can win signed copies of the book. Find Venues!